When Tara Brown Favors ’95 heard about plans to honor Kevin Richardson with a named scholarship in the Our Time Has Come Fund, she says it was an “easy decision” for her family to agree upon. Favors, vice president and human resources business partner at American Express and a member of the Office of Multicultural Advancement Alumni Advisory Council, made the lead $25,000 gift to launch the scholarship. 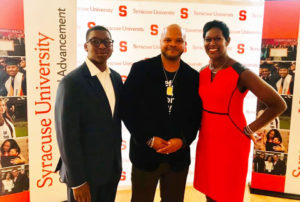 Favors is also the mother of two boys—Davis, 14, and Dalton, 17. Like many others, she and her family were deeply impacted watching Ava DuVernay’s When They See Us, a dramatization of the famed Central Park jogger case told from the point of view of the five young men wrongly accused and convicted and their families, as well as by the Ken Burns documentary The Central Park Five and the Sarah Burns book The Central Park Five: A Chronicle of City Wilding.

Creation of the Kevin Richardson Scholarship was announced at a fundraising reception honoring Richardson on Sept. 8. Favors says it was her son Dalton, attending the reception with her, who urged her to launch the scholarship fund. “Giving back is important. Helping launch this scholarship is giving back in a way that is particularly meaningful to me and my family,” she says.

Favors earned a bachelor’s degree from Syracuse University in psychology with a minor in human resources. She also earned a master’s in human resources from the New School of Social Research. Her career in corporate human resources includes positions at Merrill Lynch, Morgan Stanley, Revlon and Deutsche Bank. She also serves on the board of the Valerie Fund, which supports children with cancer and blood disorders, and is a member of Jack and Jill of America Inc. and The Links Inc.