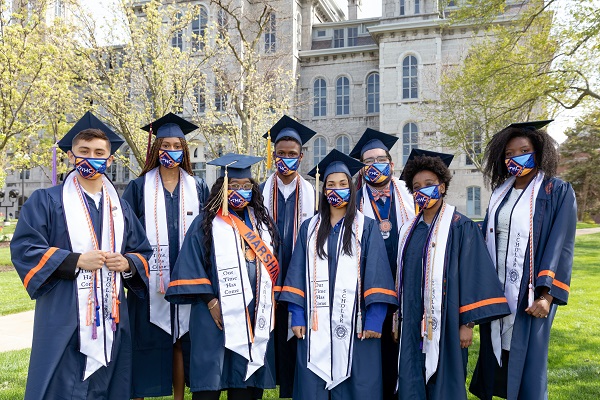 The Our Time Has Come Program celebrates 32 graduating seniors

The Office of Multicultural Advancement paid tribute to 32 graduating seniors at its annual Our Time Has Come (OTHC) Scholarship Program ceremony, held on May 6. After more than a year of mostly remote learning, the scholars were able to convene in person for the socially distanced ceremony at the Schine Student Center, while family and friends tuned in remotely via Zoom.

“We celebrate the 2021 class of OTHC Scholars that my team and I have had the pleasure to get to know as they move from students to alumni,” said Rachel Vassel ’91, associate vice president of multicultural advancement, in her welcoming remarks.

“You have maintained this exceptional academic achievement during a year when we were all challenged by the realities of the global pandemic . . . despite altered schedules, different course formats and . . . during a time when you may have felt the toll of being separated from friends and loved ones,” Syverud said.

The keynote speaker for the event was Gisele Marcus ’89, a member of the Multicultural Advancement advisory council, generous OTHC donor, and mentor to OTHC students. Marcus, a TEDx speaker, is chief operations officer at NPWR, a networking app in the development phase, and was previously general manager of the $20-million asset management services business at Thermo Fisher Scientific.

Speaking remotely from her home in St. Louis, Missouri, Marcus shared “Giselle’s Gems,” five pieces of wisdom for students as they embark on their professional careers. First was to “be who you are.

“You may be the youngest person. You may be the only person of color in the room. You may just be the person that is the difference maker,” said Marcus, who related an incident when she was the only African American present at a meeting to decide which employees received promotions and also the only person who recommended a person of color for promotion. This was at a company that prided itself in spending a billion dollars annually with diverse vendors. After speaking up, a second meeting was held, and promotion candidates reconsidered.

Second, never waste an interaction. “Everyone has people they disagree with or are not excited to deal with, but you can learn from anyone, even if you learn what not to do,” she said.

Marcus extolled the importance of networking—that it’s not always just hard work that gets you ahead but who’s in your corner that may help you move up. “Networking is the currency by which things get done,” she said.

To that end, her fourth piece of advice was to secure a “sponsor, someone who will speak on your behalf when you’re not in the room,” she said. Beyond mentorship, “you want someone that’s raising their hand, putting their career on the line for you.”

And finally, Marcus urged students to start early in sharing their “time, treasure and talent in ways that create a legacy for you and that uplift others.”

Student speakers Russell Fearon ’20, G’21 and Payton Campbell ’21 also imparted wisdom from lessons learned. Fearon discussed the importance of resiliency in the face of adversity, sharing his diagnosis of Type 1 diabetes two years prior. But it was that setback that led the budding entrepreneur to invent the SugEx watch, a patented wearable glucose monitoring system. “Success doesn’t just happen out of nowhere,” he said. “It had to begin with escaping complacency, letting go of the ‘sorry for myself’ attitude. It begins by going for it and by taking the risks.”

Campbell also touched on resilience, sharing her transformation since arriving as a naïve freshman from Houston, Texas, and her struggles to overcome financial aid shortfalls, insecurity, and the isolation of being the only Black woman in her graphic design major. “I’m more than proud of the woman that my time here has helped me to become,”  she said. “I had to rise to the occasion to do the impossible. I learned more than anything to never settle for less than what I deserve. And I accomplished that through going after everything I wanted in my collegiate experience.”

The OTHC Scholarship Fund benefits underrepresented students with unmet financial need at Syracuse University, many of them first-generation college students. The scholarship fund continues to grow and support an increasing number of students through the generosity of donors, primarily alumni of color.

View a video of the ceremony .