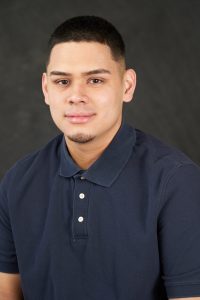 As a teenager, Fidel Rivera ’24 learned how to gain root access to his iPhone, essentially cracking the phone’s security to access to its operating system and the ability to make alterations or install non-approved apps.

That began his love for technology. “I just liked knowing how things work and always wanted to learn more,” Rivera says.

He’s doing just that. The tech enthusiast is now a sophomore at Syracuse University majoring in information management and technology. While still early in his academic career, Rivera is interested in data analytics and contemplating staying to earn his master’s degree. “I’m not sure yet what exactly my role will be in terms of technology, but I know I want to help make technology more accessible to as many people as I can,” he says.

Rivera’s favorite class this semester is IST 343, Data and Society. “We’re looking at the intersectionality of how data and technology affects our society today,” he says. “One of the topics covered was the Facebook and Cambridge Analytica scandal, which showed how microtargeting of ads and content can sway entire elections. I’m always interested in learning how data affects us.”

The Queens native says he was attracted to Syracuse University by both the iSchool and Syracuse’s reputation in football and basketball. “I’m a big sports guy,” he says.

His decision to attend Syracuse was cemented when he was accepted to the University as an Our Time Has Come (OTHC) Scholar. “As a first-generation college student, those dollars made a huge difference in deciding to attend and contribute greatly to being able to afford staying here,” he says.

Rivera also values the “amazing” leadership development programming and other opportunities OTHC affords, most recently attending the Coming Back Together (CBT) reunion. “It was really fun to meet so many alumni and hear their stories about their experiences and how campus has changed,” he says, recounting an alumna who told him that when she attended the domed stadium did not exist. “I had no idea it would be as meaningful as it was.”

In addition to OTHC, Rivera is a WellsLink Scholar and has a work-study job as a facilities supervisor at the Barnes Center. He says he’s thankful for the ability to have a mostly normal campus experience this year. “I’m going to classes in person and interacting with so many more people he says.

And he’s finally attended home football and basketball games at the Stadium. “It’s a crazy environment that didn’t even exist last year,” he says. “It almost feels like I’m having a second freshman year.”

To support students like Rivera, please give to the Our Time Has Come Scholarship Program.