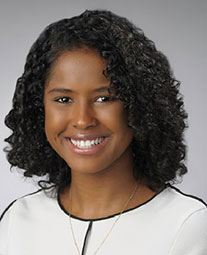 When Nerys Castillo-Santana ’19 began her technical internship at GE last summer, she initially felt discouraged that her coding skills weren’t up to par. She reached out for guidance to Dwight Perry, who she’d met through Our Time Has Come Leadership Development programs the previous school year.

“He really became my mentor,” says Castillo-Santana, a senior from the Bronx, New York majoring in information management technology. “He coached me in how to persevere through an obstacle and be the best underdog I could be.”

That guidance paid off. At the end of the summer, Castillo-Santana was offered a full-time position after graduation in GE’s prestigious Digital Technology Leadership Program. Over two years, she will rotate through four different technical roles within the company and, at the end, will be placed in a senior position in the sector of her choice. “The program really accelerates your career,” she says.

Castillo-Santana is all about networking. A big reason she chose Syracuse University was because of the alumni network and professional connections the school afforded. “I knew going to SU, I would most likely have a job when I graduated,” she says.

But she’s worked hard at making connections. A finance minor, Castillo-Santana has been actively involved in the National Association of Black Accountants (NABA) chapter, serving as senior vice president last year. It was through that organization that she secured top-notch internships each summer—financial internships at Ernst and Young after freshman year and KPMG after sophomore year, and her technical internship at GE this past summer.

Castillo-Santana was named an Our Time Has Come Scholar at the beginning of her junior year, something she regrets not pursuing earlier. “The program has provided great professional development opportunities and amazing connections in the business community,” she says, “I’ve also gotten to know other scholars that I had never even seen on campus before, which provides even more networking opportunity. As scholars, we’re a really close community.”

Castillo-Santana, who is spending fall semester studying in Madrid, has tried to pay it forward by serving as a role model to younger students. She has mentored preteen girls in the Syracuse community through Straighten Your Crown, and worked as a math instructor and tutor for high school students in the Say Yes to Education program. “I offer them a lot of guidance on college prep stuff too,” she says. “I try to help them from my experience.”