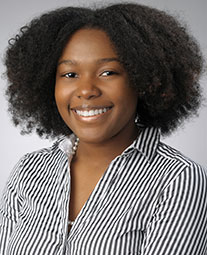 Nakira Christmas had an excellent role model while she was growing up in Maryland and Virginia. “My mother is very family oriented, and I have seen what it means to constantly persevere,” she says. “I never wanted for anything, and my mother made sure I was a woman of my word who follows through on what I say and do.”

That commitment to ethics and excellence prepared Christmas well for her college career at Syracuse University, where she has distinguished herself as an outstanding student, athlete, and Our Time Has Come scholarship recipient. “Syracuse is the gem of universities,” she says. “I chose to pursue my education here because I knew I could make an impact.” Syracuse’s cheer team, prestige, educational quality, and proximity to home were also factors. “This was the only school I visited prior to making my decision,” she recalls. “As soon as my mother and I completed the tour, attended the 2014 NC State football game, and enjoyed Marshall Street, I told her this was the university for me.”

As a bioengineering major with a minor in electrical engineering, Christmas is a rarity in her chosen field, and she feels she has a responsibility to the women who follow in her footsteps. “As a young black woman in the world of engineering I know there are going to be battles I have to face. But I also know that there is a solution for every problem, and that gives me the drive to keep going no matter what adversity I encounter,” she asserts.

Christmas grew up as an only child but when she came to Syracuse, she says she discovered “a sisterhood that is unimaginable.” Her new “sisters” were members of Alpha Kappa Alpha Incorporated, a sorority she joined as a sophomore. “I love their mission and their standards, and this is a collegiate experience I will carry wherever I go,” she says. “I’ll pass down the love to future generations.”

It was those sisters who urged her to pursue the Our Time Has Come scholarship. “This scholarship is one of the best things that has happened to me in college,” she says. “Its programs for personal and academic growth are unmatched. The OTHC scholarship has allowed me to understand that I am more than just another black student on campus. I am a seed that will continue to grow, and I will pass on what I am learning to future scholarship candidates.”  Christmas will complete her bachelor’s degree in May and plans to remain at Syracuse for another year to earn a master of science in bioengineering.

“My dream job is to have my own company, manufacturing and selling artificial ligaments for athletes and anyone else who needs them,” she says. “I would also love to become a tenured professor and continue doing research.”

Christmas believes that Syracuse helped her fulfill her potential and she wants to pay it forward. “Our Time Has Come is a program built on connecting the past with the future,” she says. “I have been given opportunities that helped me reach my goals, and I plan to donate to scholarships so I will be connected to my beloved alma mater long after I depart from campus.”