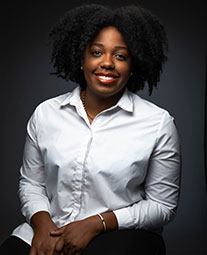 Abigail Covington is capping off her Syracuse University career with one of the institution’s most prestigious honors for undergraduate students: Senior Class Marshal. One of two students selected for the honor, she will represent her class at University-wide events and programs this year and in May will lead the Class of 2019 and carry her class banner to open Syracuse University’s 165th Commencement.

“I wanted to have a larger impact on campus and open up the activism I was doing outside the black community. I felt that was a space where I could have that kind of impact,” says Covington of her decision to apply for the position. “It’s been a really great experience so far.”

Being named Class Marshal is only the latest recognition of Covington’s academic and leadership achievement. The Bowie, Maryland, native is also a Benjamin A. Gilman Scholar, Emma Bowen Foundation Scholar, Ronald E. McNair Scholar, and an Our Time Has Come Scholar.

Covington was named an OTHC Scholar before her junior year. “That fall was CBT, and it was really wonderful to participate in CBT programming and meet alumni who had contributed to the fund,” she says. “I’ve been closely aligned to the program and the other scholars ever since because I’ve found so much value in the people I’ve met.”

Covington majors in writing studies, rhetoric, and composition—with minors in public communications, and information technology, design, and startups—and has earned Dean’s List honors every semester. Professionally, she is interested in merging communications with media and technology, specifically digital media strategy. “By combining programs at Newhouse and the iSchool with the writing program, I’ve kind of been able to create my own program,” she says. “What I want to do really exists at the center of those three things.”

Covington has served as a social media intern on campus with the Office of Multicultural Affairs and interned for three summers with global communications marketing firm Edelman. She’s also involved with CLLCTVE, a student-run creative agency focusing on social media. She is applying to graduate school to study new media management.

Outside the classroom, Covington has held leadership positions in a variety of campus organizations, including vice president of internal affairs for the Black Leadership Network and co-chair of programming for Empowering Minds, and served as a contributing writer with Femme Noire, a mentor with Straighten Your Crown, and a member of the WellsLink Leadership Program.

I really am just a regular student,” she says. “I just see the ability to impact the spaces I occupy. I believe that whenever we as people are put in new spaces, it’s not simply to exist. I hold myself responsible to transform the environments that I’m in.”