Applying for college as a first-generation student, Marceli Rocha-Rocha wasn’t sure attending a private university was an attainable goal. Growing up in a Mexican agricultural community in California’s Bay area, her family didn’t fully recognize the value of education—particularly for women. They didn’t understand why she’d want to leave her family and couldn’t support her financially. 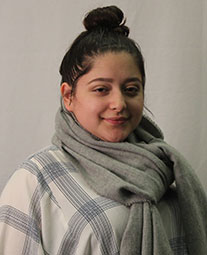 Rocha-Rocha was able to attend Syracuse University thanks to a generous financial aid package. But while most of her expenses were covered, being a first-generation student so far from home was still a struggle. “I didn’t know what I didn’t know,” she says. “Everything I know now was built on making mistakes and having to figure things out because I didn’t have family advising me along the way.”

Culturally, coming to Syracuse was a shock. “I come from a community that’s 89 percent Mexican, where everyone in the stores and businesses speaks Spanish, and from an immigrant family with mixed documentation,” she says.

Initially, Rocha-Rocha felt like an outsider, even within SU’s Latinx community. “There were students here who might look a little like me, but we don’t have the same references, use the same slang or listen to the same music,” she says.

But two things helped change that—joining her sorority, Lambda Theta Alpha, and becoming an Our Time Has Come Scholar. “Finding home as a student was very important to me,” she says. “Both of these groups opened their arms to me even if everyone wasn’t from the same exact background.”

Rocha-Rocha has used her own struggles as a platform to help others. Through her sorority, she mentors fourth-grade female students at McKinley Brighton Elementary School. Through her social work major, she works as an advocacy intern at Vera House, a women’s shelter and domestic violence advocacy organization in Syracuse. “I have my own case load, do crisis calls and run the domestic violence education course,” she says.

She also works with the charter school she attended in her hometown, which targets first-generation Latinx students from agricultural and low-income areas to help them get to college. Rocha-Rocha assists the school with community engagement through social media and by putting together PowerPoint presentations related to college admissions. “Anything I can do virtually,” she says.

Last year, as a study abroad student in Madrid, Rocha-Rocha helped organize programming for students struggling with the cultural transition and/or lacking funds to travel to a new city every weekend. “We explored various neighborhoods of Madrid and had talks about racism, sexism and culture shock,” she says. “It was important to build space to be able to talk about experiencing different forms of racism than what we’re used to in the U.S.

Rocha-Rocha will graduate with a degree in social work, and will apply to  graduate school to earn her master’s in social work and is considering going on to law school. “I know I want to work in a helping profession doing advocacy and policy but am not sure right now which direction that will take,” she says.

Whatever the means, the goal is to make the path a little easier for someone else. “The thing about coming to a place like this is, I realize I wasn’t supposed to make it,” she says. “But I’m almost there. Despite all the obstacles, graduation is almost a reality.”