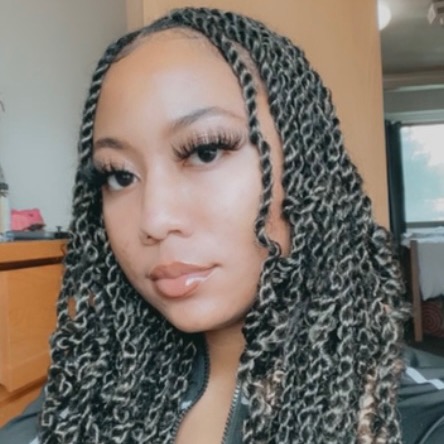 JayLynn Santiago ’21 is proud to be from Harlem. “I’ve always seen Harlem as a magical place. It is a breeding ground for African American success; a place where historical figures like Langston Hughes and Zora Neale Hurston used their artistry to contribute richness to the culture,” she says.

But she’s disturbed by the gentrification that has led to an increase in the cost of living. “We can’t afford to live comfortably within our own community,” she says, referring to her longtime neighbors. “Instead, we must quietly sit back, watching an influx of newcomers replace the very people who made this neighborhood so desirable.”

As a high school student, Santiago saw the direct impact of gentrification as a volunteer with Meals on Wheels and at a local food bank. “It was disheartening to witness how many Harlem residents were struggling to acquire food,” she says. “The lack of access to proper nutrition at affordable prices keeps my community stagnant and unhappy.”  Now a senior at Syracuse University, Santiago is studying psychology with the desire to become a licensed therapist and help tackle mental health issues in her home community. She says her culture as an Afro-Latina is integral to her identity, a major reason she sought a diverse campus community that supports its students of color.

Santiago transferred to Syracuse as a sophomore from the State University of New York (SUNY) at Plattsburgh, which she says did not challenge her academically. Being named an Our Time Has Come Scholar played a major role in helping her acclimate to her new campus. “It’s not unusual for me to be one of the few African American students in a class, but knowing that I have a community of students who look like me or who are interested in the same things as me, makes me feel more comfortable,” she says. “From meeting fellow students to attending leadership programs, I have acquired networking, leadership and communication skills, and I have access to a vast group of successful African American and Latino alumni that are supporting me and motivating me to excel.”

That’s on top of the scholarship, which has helped to make Syracuse University a more affordable option. “Being raised by a teen mother in a single-parent household has had its difficulties but also opened my eyes to how I want to make my future better for myself and everyone around me,” she says.

Understanding the support required by low-income minority students, she got involved with JUMP Nation, a campus organization that works with at-risk Syracuse teens with a goal of decreasing the high school drop-out rate and increasing college enrollment. This year, she serves as the organization’s secretary.

Unfortunately, COVID-19 has forced JUMP Nation to conduct its sessions remotely via Zoom. “It’s been a real challenge getting the students to join and participate,” says Santiago.

But she’s not giving up hope. Like Harlem, “Syracuse University is another layer of my identity and is a community that I am actively passionate about,” she says. “As a member of this community, I know that we can all benefit from each other’s knowledge and experiences.”