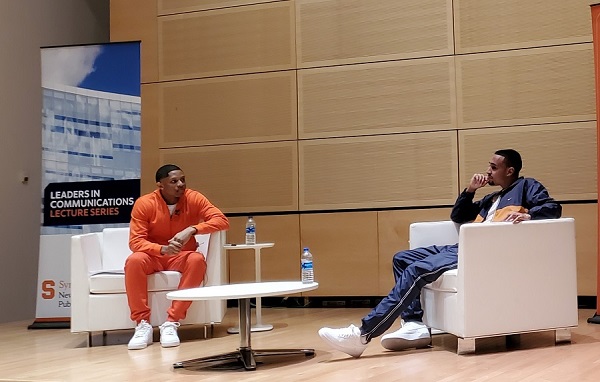 Speedy Morman ’16 on Success: Work Hard and Be Yourself

As a first-generation college student, Chris “Speedy” Morman ’16 may not have had anyone at home to help guide him through his experience at Syracuse University. But he did have the example of two hardworking parents whose work ethic made a big impact.

“Work ethic is everything,” says Morman, who rises at 4:30 a.m. each weekday. “It sounds cliche but working hard really does outweigh just about everything.”

Morman is an anchor and host at Complex, an entertainment network focused on pop culture, streetwear and style, music, sports and food, and a host of The Hype on HBO Max, a streetwear competition show.  Only 27, Morman has interviewed some of the biggest athletes, actors and artists in the world, covering events including the Grammys and NBA Finals and hosting livestreams for millions of viewers, all with a high-energy presence that makes him a relatable viewer favorite.

Morman hasn’t gotten where he has by luck, but by pure hustle and drive, a message he shared with Syracuse University students on March 2 at a “Leaders in Communication” lecture at the S.I. Newhouse School of Public Communications.

Morman’s stipulation for his appearance, co-sponsored by the Newhouse School, the Office of Diversity and Inclusion and the Office of Multicultural Advancement, was that he be interviewed by a student of color, his way to pay back for the opportunity he had as a Newhouse student to interview rapper and journalist Sway Calloway during a campus visit. Morman’s conversation was guided by Newhouse School junior Jordan Pierre ’23, who like Morman as an undergrad, is an Our Time Has Come (OTHC) Scholar.

Through thoughtful questioning by Pierre, Morman shared his path from Queens, New York, to Syracuse University and his professional success as an interviewer and influencer.

Growing up, Morman says his life centered around basketball. But at 5’10, he realized that basketball would not be his career path. As a high school student, he regularly watched ESPN’s SportsCenter and 106 and Park on BET. Morman decided to pursue broadcast and digital journalism and came to Syracuse University because it had the best program.

As a student, he put together a network of writers, photographers and videographers to produce something he called The Honor Role, which covered topics he was interested in such as sneakers, hip hop music and pop culture. He used that platform to do interviews and create video samples of the kind of work he was interested in doing professionally one day.

After his sophomore year, Morman earned an unpaid summer internship at Complex. His mission was simple, to out-hustle everyone else. “No intern in that building worked harder than I did,” he says. In addition to his official assignments in the sneaker department, Morman made it a point to learn all aspects of production from video and audio to lighting. “I knew how to do everything, so just in case there was an instance where they needed me to do something extra, I’m ready.” In addition to that full-time gig, he also worked 30-hours-a-week bagging groceries at Costco.

Morman was invited back the following summer, where he made an even bigger impression. At the end of the internship, he was given a screentest and offered a job as weekend anchor. He was 20 years old.

It was a crossroads. Did he take his dream job or return to Syracuse to finish his degree and become the first college graduate in his family?

But Morman didn’t choose. Instead, he returned to Syracuse for his senior year, commuting six-hours by Greyhound bus each Friday to work his anchor job, and then make the return trip to Syracuse on Sunday night. Every weekend, all year long. The day after graduation, he began working at Complex full time.

“It was physically and mentally taxing,” Morman says of that year. While his double life meant giving up the weekend socializing of a college senior, that sacrifice paid off.

Today, Morman is one of the most recognizable faces of the Complex brand. Despite his success, his work ethic has never waned. “In order to be the best at what I do, my vow to myself is that I’ll never come across a person who will work harder than me,” he says.

Earlier in the day, Morman shared his experiences with a group of current OTHC Scholars over lunch. He urged them to fight imposter syndrome, to believe in their worth and follow their own passions.

For Pierre, the opportunity to interview Morman was a “surreal experience,” saying Morman gave him the reassurance to pursue his dreams even though they may vary from the typical route.

“To be speaking with an alumnus that shared a similar upbringing and collegiate experience showed me that it is possible to amount to more than a statistic,” he says. “I am now able to use Speedy Morman as a reference for someone who went against the grain, remained himself and excelled in the workforce.”