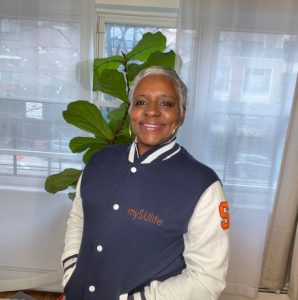 Brooklyn native Gina (Brown) Keller ’89 has developed a social media following by chronicling her life, including raising a teenage son, finding love with a childhood friend after age 50, and planning a wedding. #myBKlife grew from a hashtag to an Instagram account, YouTube channel, website and a line of myBKlife slogan clothing and accessories.

On April 15, Keller will release an offshoot of that brand, mySUlife, a line of similar merchandise with a slogan to appeal to her fellow Syracuse University alumni. A portion of proceeds will benefit the Our Time Has Come Scholarship Program.

“I believe it’s important to support our youth and provide students with opportunities,” she says. “Syracuse University is not cheap. Having been a student and preparing to send my own son to college, I know what a challenge it can be.”

Keller started myBKlife in 2018 with fiancé Steve Brown after seeing positive reactions to the #myBKlife she added to her social media posts. She and Brown had grown up on the same Brooklyn block and reconnected in 2014. Their love story, reflected in their social media, gained a following. “Steve said, ‘We need to put this on a hoodie,’” Keller recalls.

The hoodie was soon joined by T-shirts, hats, masks, and other merchandise bearing the slogan and is often worn by Keller and Brown in their social media. 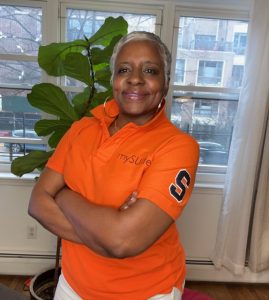 “myBKlife represents all the positive aspects of our lives and is also a reflection of our love for Brooklyn,” says Keller. The couple also has a YouTube show, Car Chronicles with Steve and Gina, in which they chat about everyday life from their car, including postponing their wedding due to the pandemic. “We received such great, positive feedback, we just kept going with it,” she says.

The couple, who will be married this spring in Brooklyn, sell their merchandise via the myBKlife website and through pop-up shop events they started during the pandemic. “We held the first one in August 2020 and sold out 90% of our merchandise,” she says.

A devoted alumna, Keller has regularly attended CBT reunions and served on event committees, co-chairing the first CBT 5K Fun Run in 2017. At CBT 2021, she and Steve took part in the inaugural ’Cuse Marketplace, where alumni entrepreneurs had the opportunity to promote products and services.

“A classmate told me she followed my social media and suggested doing something with mySUlife. That’s where the idea was born,” says Keller. “It really made sense as an expansion of sharing my life.”

mySUlife merchandise will be available for sale on MyBKlife.com. Keller says the new line is a direct result of her Syracuse University network. “This is my way to give back,” she says.