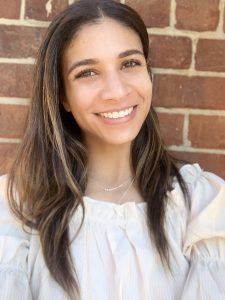 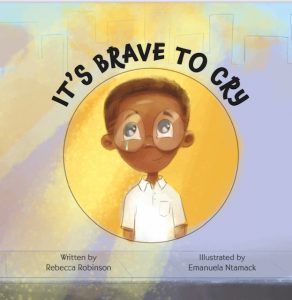 Between the COVID-19 pandemic, a national reckoning on racism and injustice and a toxic political climate, there’s no doubt that 2020 was a tough year. “If I was having difficulty processing my emotions, I could only imagine how hard it must be for children,” says Rebecca Robinson ’16.

Drawing from her educational background in psychology and experiences volunteering with school-aged children, Robinson responded by writing a children’s book, It’s Brave to Cry, published in December.

“It was my outlet during the COVID shutdown,” she says. “I wanted to use my background to create something to help kids. It seemed like a perfect time to get this book out there and let children who are feeling all these big feelings know that it’s okay to cry.”

Robinson was also motivated by a recognition that men in her own life have difficulty expressing themselves. “There’s a stereotype about Black men being stoic that I wanted to attack and address,” she says.

It’s Brave to Cry tells the story of a young boy named Clay who has trouble expressing his emotions. After a hard day at school, Clay’s father encourages him to share his feelings, telling him that it’s a brave thing to do. Unconvinced, Clay sets off on an adventure to ask some of the bravest people he can think of if they ever cry. In the process, Clay learns that crying is a normal reaction to emotions and negative events and not a sign of weakness.

“There’s too much going on in this crazy world to keep all these feelings inside, we have to start letting them out,” says Robinson, who was recruited to Syracuse as a track and field athlete and applied to the University early decision after her official visit. A sprinter, she ran the 400 and 4×400 and 4×100 relays, qualifying for regional competition three out of four years and helping set what was then a school 4×100 relay record. After earning her bachelor’s degree in psychology, she continued her education at Columbia University, earning a master’s degree in educational psychology.

Today, Robinson is a student success advisor for educational management company 2U, working with professors who teach in an online master’s program to help them strategize different teaching methods for specific types of learners. She lives in Alexandria, Virginia, with her fiancé, Adrian Flemming ’14, G’16, who she met at Syracuse, and their dog, Marshall, who is named for Marshall Street. Outside of work, she enjoys volunteering at local schools as a tutor and coach, but with those activities curtailed due to COVID, she turned her energies to her book.

Writing the story was just the beginning. At first, she reached out to publishers hoping one of them would pick up the book. “There was interest, but ultimately I didn’t want to have to embrace any of their suggestions—such as changing my characters to animals or introducing white characters,” she says. Networking through social media groups for first-time authors, Robinson found an illustrator, and ultimately self-published the book through Amazon. “It’s one of the most empowering things I’ve done for myself and my career,” she says.

While promoting the book has been a learning experience, Robinson says she’s gratified by the response that her story has resonated with parents, educators, and young readers. “I feel very blessed to have things turned out as they have,” she says.

As for Clay, Robinson says she’s confident his journey of self-discovery is not over. “This is just the beginning for me as a children’s author,” she says.

It’s Brave to Cry is available from Amazon or at RebeccaRobinson.org.