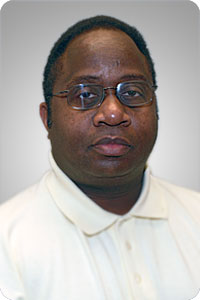 Clean air is essential to good health, yet many low-income communities are disproportionately impacted by air pollution. According to a 2020 report by the American Lung Association, people of color are 1.5 times more likely to live in an area with poor air quality.

As a physical scientist working for the Environmental Protection Agency (EPA), Eric Hall ’83 has developed statistical models incorporating data from satellites, air quality monitors and air quality models that provide actual concentrations of fine-particulate air pollution on any parcel of land in the United States.

Hall developed and managed a five-year research collaboration between the EPA and the Centers for Disease Control and co-chaired the Air Control Group for the CDC’s Environmental Public Health Tracking Program. One research project compared air pollution data against records for emergency room admissions and hospitalizations for asthma, myocardial infarction and heart failure in Baltimore, Maryland, study results published earlier this year in the journal Atmospheric Environment.

“People need to understand how their exposure to air pollutants can influence their health,” says Hall, who is a board member of CleanAIRE NC, a climate change and air pollution advocacy organization in North Carolina. “Communities need to be able to access resources that will help them implement policy choices and make sustainable decisions in terms of land use, buildings and infrastructure, transportation, and materials management.”

More recently, Hall’s research has focused on harmful algal blooms and their impact on waterways. Working with the Colorado River Indian Tribes and the Chemehuevi Indian Tribe, he has studied how the re-introduction of native plants in creeks and rivers eliminates the algae blooms, which are caused by excess nitrogen or phosphorous in the water. “Over time, land has been converted from forest or wetland to farmland and then to housing developments and commercial property,” he says. “All of that changes the pollutants that enter the waterways.”

Hall says the research programs he’s worked on are in areas where exposure science, human health, statistics, modeling, sustainability, and environmental justice intersect. “I get to work on interesting scientific questions and look at them from a variety of perspectives using a number of different tools and problem- solving strategies,” he says.

He draws from his background and expertise in satellites, sensor simulators, software engineering, modeling and programming honed during his 11-year career as a military engineer, and later, as a private contractor to the Air Force GPS satellite support facility and as a software architect for the telecommunications sector.

Hall says he’s been interested in science since he was a young boy. His father was a lab manager in the chemistry department at Temple University. Hall was awarded a full four-year U.S. Air Force Reserve Officer Training Corps (ROTC) Scholarship, and came to Syracuse University, attracted by a dual aerospace and mechanical engineering program available at the time.

In addition to ROTC, which Hall says provided life-long leadership skills, he served as a student representative to the Syracuse University Board of Trustees, as a member of the Student Afro-American Society, as a student advisor to the Office of Minority Affairs and as a math tutor. When he graduated in 1983, he became the first Syracuse University student to graduate with degrees in both aerospace engineering and mathematics.

Hall accumulated many other firsts in his Air Force career, which included serving as a software engineer and modeler in military aircraft, radar, and sensor simulators, computers, and avionics; as a satellite engineering officer for the GPS satellite constellation; teaching mathematics at the U.S. Air Force Academy and systems engineering courses at the US Air Force Institute of Technology; and as deputy division chief of the international programs division for Wright Aeronautical Laboratories. Along the way he also earned master’s degrees in business and civil engineering and is on track to earn a Ph.D. in science, technology, engineering and mathematics (STEM) education in 2023.

Hall acknowledges that, on the surface, his professional history may look eclectic, but says that it’s all rooted in scientific inquiry, problem solving, and public service. “I think it’s important to be open to change and to be willing to be a lifelong learner,” he says. “The scientists I worked with in the Air Force and the scientists I work with now are driven by a similar mission.”