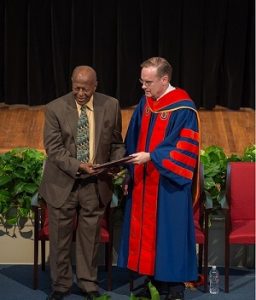 A Champion for Social Justice Link

Syracuse University lost a trailblazer and champion for inclusion and social justice with the passing of Charles Vert Willie on Jan. 11. A student, teacher and administrator at the University for more than 25 years, Willie broke barriers as his academic career ascended.

Willie came to Syracuse University in 1950 as a graduate student and teaching assistant in sociology. He joined the faculty as an instructor two years later and earned his doctorate in 1957 from the Maxwell School of Citizenship and Public Affairs. When he was appointed chair of the Sociology Department in 1967, he became the first Black department chair in Syracuse University history and later, the first Black full professor. He served as vice president for student affairs from 1972-74, becoming the University’s first Black vice president.

Throughout his tenure, Willie supported and advocated for students of color, and counseled faculty and administration in the negotiation of controversial issues, including the student takeover of the administration building and the boycott of the Syracuse Eight, both in 1970.

In 1974, Willie left Syracuse for Harvard University, becoming the first Black full professor in the Graduate School of Education. In 1999, he retired from his post as the Charles William Eliot Professor of Education and was named Professor Emeritus. He continued to teach part time for another decade.

Willie’s groundbreaking research encompassed issues of social justice—including desegregation, poverty, housing policy, and the experience of Black students at “white” colleges. He wrote more than 100 articles and 35 books on race, education and urban communities. As an applied sociologist, he focused on solving social problems, serving as a consultant, expert witness and court-appointed master in major school desegregation cases in the United States. He was once the highest lay official in the Episcopal Church in America, stepping down in 1974 to protest the church’s refusal to recognize women as priests. 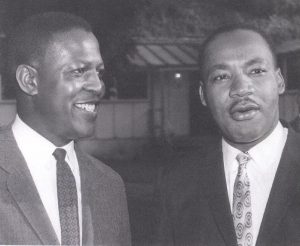 A graduate and class president of the Morehouse College class of 1948, Willie’s legacy will forever be tied to his classmate Martin Luther King, Jr., whom he recruited to the Syracuse University campus to speak in 1961 and 1965. (Visit alumni-of-color.syr.edu/wp-content/uploads/2018/04/Spring-2018-Manuscript-2.pdf to learn more).

Willie returned to Syracuse University numerous times to speak, including serving as speaker for the opening ceremony of the inaugural Coming Back Together reunion in 1983.

Willie holds 15 honorary degrees, including a Doctor of Humane Letters from Syracuse University presented in 1992. In 2000, he received the George Arents Pioneer Medal, Syracuse University’s highest alumni honor, presented to alumni who have made outstanding contributions to their fields. In 2003, the Department of Student Affairs created the Charles V. Willie Distinguished Lecture series. And in 2017, he was honored by Chancellor Kent Syverud with the Chancellor’s Citation for Lifetime Achievement.

“Through teaching, research and public service, Dr. Willie built a powerful legacy of advancing access and opportunity for all,” said Syverud at the time. “Educator and social activist . . . and he leveraged the power of social research to advance the cause of justice.”

Willie is survived by his wife of 57 years, Mary Sue, and three children: Sarah, professor of sociology and anthropology and provost at Swarthmore College; Martin, an architect and community developer; and James, who earned an M.P.A. from SU’s Maxwell School of Citizenship and Public Affairs in 1998, works in government, and serves on the Maxwell School’s Board of Advisors;  grandchildren; and other family.