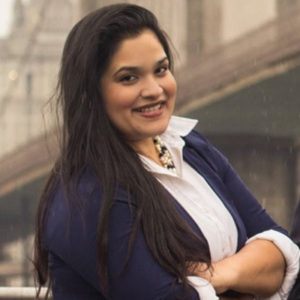 Jessica Santana is a proud Our Time Has Come alumna who is dedicating her time and energy to helping teenagers from underrepresented backgrounds pursue education and careers in technology. The following story is excerpted from an October 19, 2016, money.cnn.com story by fellow Our Time Has Come alum Octavio Blanco.

After graduating from college with degrees in business and technology, Santana had jumped right into the accounting and technology world, working in “predominantly white and male settings” and earning nearly four times her parents’ annual income.

But she felt isolated. “My entire career, I had mentors who weren’t from low-income backgrounds. There were no people who reflected my story,” she said.

She decided that she wanted to help more people from low-income backgrounds get the opportunities that she got.

With very little sleep and an initial $100,000 that she spent five months raising through grass-roots fundraising, investment grants, and other efforts, Santana and co-founder Evin Robinson launched New York on Tech—a nonprofit organization that helps underrepresented students attain degrees and careers in technology.

At 16, she noticed that many of her friends started dropping out of school. But her mom made sure that wouldn’t be a part of Jessica’s life story.

“Live your life by decision, not by default,” Santana recalled her mom telling her.

And that’s exactly what she did.

She graduated as valedictorian from high school and enrolled in Syracuse University on a full scholarship, earning both her bachelor’s and master’s degrees there.

After college, she got a job as a technology consultant at Deloitte Consulting, then became a senior tech consultant at Accenture.

Just two years old, New York On Tech has expanded throughout New York’s five boroughs and has introduced 135 students to careers in technology.

“Our goal is to get to a point where we can work with a thousand students on an annual basis,” she said.