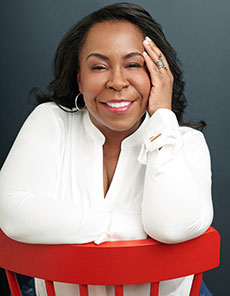 Felicia Collins Ocumarez L’98, G’98 wants to ensure the success of African American students at the Syracuse University College of Law for generations to come. That motivation inspired her to found the Syracuse Black Law Alumni Collective (Syracuse BLAC) and establish a scholarship. “We want to build a legacy of commitment to the next generation by fully endowing the $150,000 Syracuse BLAC Endowed Scholarship,” says Collins Ocumarez, who earned a J.D. degree at the College of Law and a master of public administration degree at the Maxwell School of Citizenship and Public Affairs. “We endorse a call to action to provide need-based scholarships for African American College of Law students in perpetuity.”

The scholarship fundraising campaign is called the MCMIII Movement—in honor of William H. Johnson, the first African American College of Law graduate, who was a member of the Class of 1903. Collins Ocumarez first learned about Johnson in a “Syracuse Law Review” article written by College of Law professor Paula Johnson. “It was striking how much has changed, but also what has not changed,” Collins Ocumarez says. “Racism and racial exclusion remain rooted in the legal profession today. A strong community and connection to alumni can help. Feeling like you are included and belong is imperative.”

Collins Ocumarez’s commitment to building a successful network of alumni and students evolved out of a meeting with members of the Black Law Students Association (BLSA) during the 2018 Law Reunion Weekend. A former member of BLSA who had served as vice president, Collins Ocumarez was inspired to act after hearing their concerns and challenges—reflecting experiences she had as a student. “They asked for guidance and support and wanted a connection to the alumni,” she says. “And we have a collective responsibility to ensure the success of our next generation. They needed the community of the African American alumni, and Syracuse BLAC provides that connection and community.”

A Syracuse BLAC board member will sit on the Syracuse University Law Alumni Association (SULAA) board to share strategies and partner on programs that support black College of Law students. “The commitment of Felicia Collins Ocumarez and her colleagues to the success of African American law students is strongly evident in the creation of Syracuse BLAC,” says College of Law Dean Craig M. Boise. “It joins other, growing College of Law diversity and inclusion initiatives that aim to recruit, educate and support future generations of law practitioners of color and from diverse backgrounds.”

The Syracuse BLAC Endowed Scholarship is the first of its kind under the Office of Multicultural Advancement’s Our Time Has Come Scholarship program—which supports students of color across all schools and colleges—and the alumni group’s members are energized to reach their endowment goal. Along with providing financial assistance for today’s law students, they want to create professional networking and development opportunities, build powerful partnerships for the African American community and contribute to improving the diversity of the legal profession.

For Collins Ocumarez, giving back is a priority. She pursued a dual J.D./M.P.A. degree because of a personal commitment to public service.

With more than two decades of experience, Collins Ocumarez has also worked in compliance management and as a senior in-house counsel at several multinational corporations. As an in-house counsel, she has represented numerous products and services—ranging from business consulting and financial analysis to defense services and global information technology. Those responsibilities have spanned across more than 130 countries and accounted for millions of dollars in commercial and public sector contracts with local, state, federal and foreign governments.

As founder and president of Syracuse BLAC, Collins Ocumarez joined forces with former College of Law classmate J. Christopher Hamilton L’99, G’99, a former BLSA member who also attended the 2018 Law Reunion Weekend and was inspired by the BLSA students. As a board member and current executive director and chief operating officer of Syracuse BLAC, Hamilton is equally committed to the organization’s legacy and has been instrumental in defining its strategy and bringing its vision to fruition. The inaugural leadership team also includes Michelle Perrin-Steinberg L’05, Staci Dennis-Taylor L’14 and Arneada Smith-Alexander, a board member, lifetime supporter of educational opportunities and a longstanding mentor to Collins Ocumarez. Smith-Alexander is leading the charge to constitute a historic advisory board to further sustain the organization for years to come.

In collaboration with the Office of Multicultural Advancement, Syracuse BLAC plans to participate in this year’s Coming Back Together reunion on Martha’s Vineyard, August 11-13. The organization will also host regional launches in Los Angeles, New York City, Chicago and Washington, D.C.

In discussing the importance of demonstrating one generation’s commitment to the next, Collins Ocumarez looks to Syracuse BLAC’s logo, which incorporates the “Sankofa” symbol from the Akan tribe in Ghana. “Sankofa teaches us that we must go back to our roots in order to move forward,” she says. “I believe that the knowledge and experiences of the alumni are an invaluable resource. We must seize and build off this legacy.”

If you’d like to contribute to the Syracuse BLAC Endowed Scholarship fund, visit the giving page or contact the Office of Multicultural Advancement at 315.443.4556.