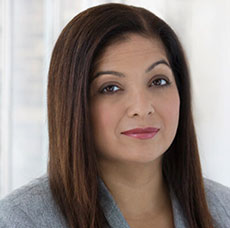 Connie Morales always knew that she wanted to go to law school, but what she didn’t know was how far she’d surpass that youthful dream. It hit home on February 7, when she was sworn in as a Judge of the Civil Court of the City of New York assigned to Bronx Criminal Court. Her sons Justin, 9 and Marco, 7 looked on with pride, along with family members who traveled from Puerto Rico, Arkansas, Florida and Tennessee.

When Morales arrived on the Syracuse University campus to begin her college career, she had already distinguished herself as a bright and motivated student. Originally from the Bronx, she attended public schools there until receiving a scholarship to attend the Ethel Walker School, a boarding school in Simsbury, Connecticut. “Syracuse was much closer to what the real world would look like,” she says. “The student body was diverse and those who belonged to traditionally underrepresented groups had a visible presence on campus. I really felt like Syracuse was the quintessential university—a large school with the coziness of a small college.”

Morales found endless opportunities to thrive on campus. “It was a great place to use my voice,” she remembers. “I founded a Latina sorority and I was active in student government, serving as treasurer my junior year. I learned to manage my time, work in a group setting, communicate, meet deadlines and balance a budget. I realized the power we all had in making changes on our campus and educating each other.”

After graduating with a dual major in political science and Spanish, Morales attended Albany Law School and practiced criminal defense law for public indigent service providers. She served as a law clerk to a Supreme Court judge in Bronx County’s Criminal Term for 14 years before deciding to run for Civil Court Judge. “I felt prepared after all those years serving as a law clerk where I was basically a judge in training,” she says. “My children were both school-aged, and it just seemed like the timing was right.” So she ran, and won in her first attempt.

“I was ecstatic,” she says. “I want to help restore people’s faith in the judicial system. I want litigants to know their voices were heard, the law was followed and the result was fair,” she adds.

When Morales considers the ways students are being prepared for the demanding careers of the future, she thinks Syracuse University is doing exceptionally well. “There are many options for majors and opportunities to study abroad,” she says. “But Syracuse also recognizes that an education must move past the walls of the classroom and into the field. Syracuse reminds students that living a fulfilling life means you can go to a game, work out in an incredible gym facility, and see a play or attend a social event on campus. Preparing students for the real world must include socialization, because it’s clear decisions are not just made in boardrooms. A person must know how to navigate social landscapes.”

Morales takes her role as an active Syracuse alumna seriously. “We need reminders of how the school impacted the trajectory of our personal and professional lives, and we should all be active, returning for alumni events and donating,” she says. “I sat on the committee for the last CBT, and even though attending events is difficult with my schedule, I need to make that time. The friendships I made at Syracuse have stayed with me—it was an incredible four years of my life.”