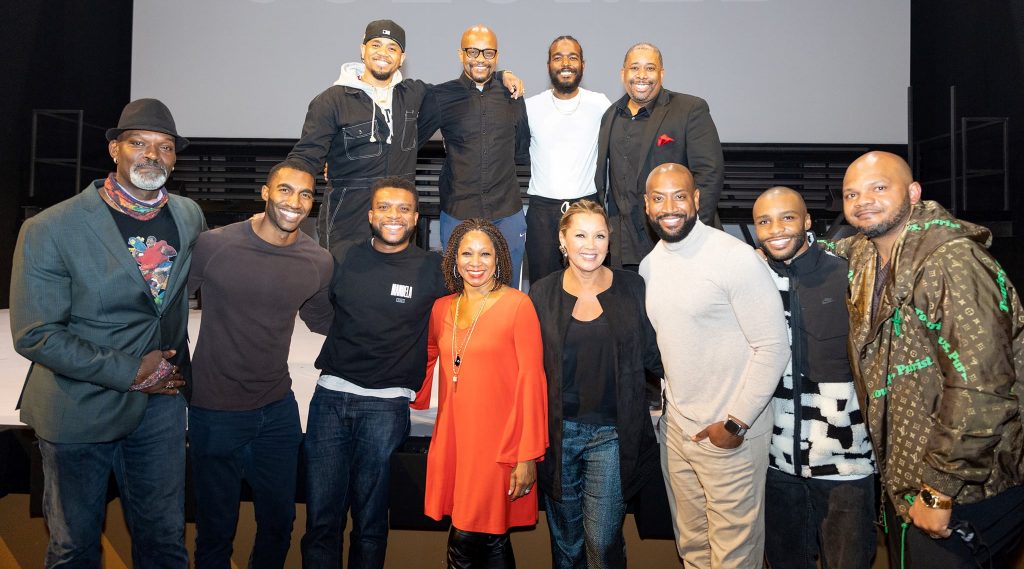 Thoughts of a Colored Man Spurs Reflection and Conversation

It was a full circle moment on Nov. 11, 2021, when nearly 150 Syracuse University alumni gathered in New York City to view and discuss the Broadway production of Thoughts of a Colored Man.

Three years earlier, at a gathering at Lubin House, sponsored by the Office of Multicultural Advancement and the College of Visual and Performing Arts, the first public reading of the play was held by then director Taye Diggs ’93. A year later, the show made its world premiere at Syracuse Stage. The Office of Multicultural Advancement held an event for alumni that included a panel talk with the play’s author, Keenan Scott II, and director Steve H. Broadnax III. A fundraiser for the Our Time Has Come Scholarship Fund, the event was followed by a reception at the Community Folk Art Center to honor Exonerated Five member Kevin Richardson H’20, beginning an association with Syracuse University that culminated in Richardson’s honorary degree.

Richardson and his wife Johansy joined other Syracuse alumni and faculty on Broadway to see how the show had evolved during the two-year period that included a pandemic shut-down and widespread outcry and reckoning over social justice issues. In addition to refining the conversations that comprise the play, several well-known actors were added to the cast— Da’Vinchi (Grownish), Tristan Mack Wilds (The Wire) and Luke James (The Chi), who sings in this version—which rounded out the cast of Broadway veterans.

The evening began with a dinner at Jasmine’s Caribbean Cuisine, a Black-owned restaurant in the theater district, and was capped with an after-show talkback that included the playwright, Williams, cast members, and producers Brian Moreland and Valencia Yearwood ’85.
It was Yearwood who initiated hosting a Syracuse University event, which was sponsored by the Office of Multicultural Advancement and College of Visual and Performing Arts. “There is not a more important play for our time,” she says. “I think everyone should see it because it dispels stereotypes and spurs conversation.”

Set over a single day, Thoughts of a Colored Man focuses on seven men as they struggle to find their identities beyond the limitations, stereotypes, and obstacles that the world attempts to place on them based on the color of their skin. The show fuses poetry, dance, and storytelling to explore perspectives of Black men from all different walks of life, their hopes, dreams, fears, and sensitivities.

Thoughts of a Colored Man is Yearwood’s first experience as a producer. “I entered the pandemic as an unemployed actress and came out a Broadway producer,” she jokes.

But after reading the script, Yearwood felt compelled to get involved with the project. “These are voices that have not been heard on Broadway,” she says. In addition to an all-Black male cast, the show has a Black playwright, Black director and two out of three lead producers are Black. “I think it is really important for us to be in a position to tell our stories as opposed to having someone else tell our story. I knew that in order for that to happen, that it had to have Black support,” she says.

As a producer, one of Yearwood’s first responsibilities was fundraising and she’s proud that all investors she secured except one are Black, and all are first-time Broadway investors. “We talk about diversification in terms of casting all the time, but we really don’t think about diversification of commercial theater in terms of producers and investors. I thought this was a great opportunity.”
Thoughts of a Colored Man is scheduled to run through March 2022. “I encourage everyone to see that play so that we can guarantee our run and perhaps extend it,” Yearwood says.