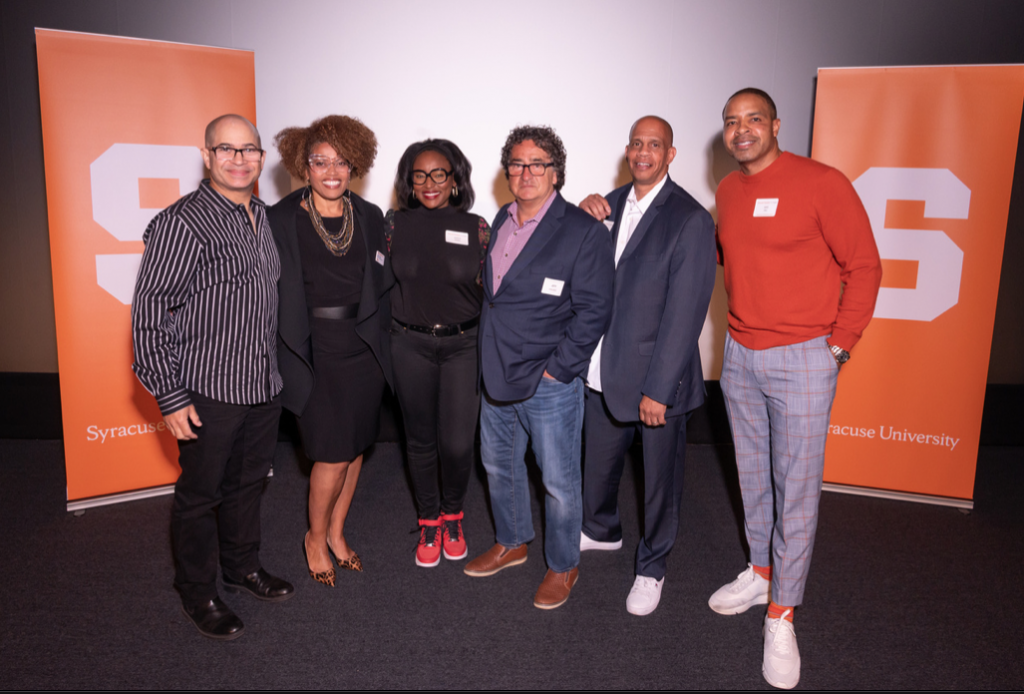 New media platforms have opened pathways for multicultural storytelling. In an attempt to support more creatives of color in making their mark, a panel of successful entertainment industry professionals shared their experiences and perspectives with Syracuse University students and alumni. “A New Era for Diverse Content Creators,” co-sponsored by the Office of Multicultural Advancement and SU in LA, was held at the Harmony Gold Theater in Los Angeles on April 13.

The event was part of an ongoing partnership between SUMA and SU in LA to bring more diverse content to the Los Angeles region and to students who are spending a semester in LA, as well as an opportunity for diverse alumni to connect professionally in an industry where they are underrepresented.

“As a diverse creator, I feel no higher professional obligation than holding the door open for new voices, new stories and new ideas from diverse individuals, says actor and producer Darryl Bell ’86, who served as moderator for the event.

The presenters talked about their journeys to success, opportunities that have opened up due to the digital age (such as digital networks and social media where content is needed and the “little guy” can build an audience without a network television deal), and institutional racism and sexism in the industry.

“After almost 40 years in the entertainment industry, I feel an obligation to my fellow artists and executives to maintain a robust conversation about the triumphs and challenges that face our business,” says Bell. “We owe it to ourselves to have those discussions and to invite the next generation to participate. That applies to film, television, linear production, streaming, gaming and sports.”

James has participated in several alumni panels for Syracuse University but felt this program was unique. “Black and Brown alumni coming together to speak on issues of multicultural content creating and diversity with current and past SU students was a total delight,” she says.

Her message: content creators of color deserve the same opportunities as their peers to both succeed and fail without prejudice. “There are those in this business who can fail upward, and those, unfortunately, whose failures can follow them throughout their careers, who tend to mostly be creators of color,” she says. “One of the ways we can rectify that is to support creators of color with equal dollars in marketing, promotion and production budgets, and continue to support them on their future ventures even in the aftermath of projects that don’t see a second or third season.”

The candid conversation was enjoyed by participants and attendees alike.

“Our team in Multicultural Advancement always enjoys providing a platform for diverse alumni to share their professional experiences, whether during Coming Back Together or as part of our regional programming,” says Rachel Vassel ’91, G’21, associate vice president of multicultural advancement. “We are grateful to the talented alumni and friends of SU in entertainment for making time to connect with our Los Angeles-based students and alumni for this program.”